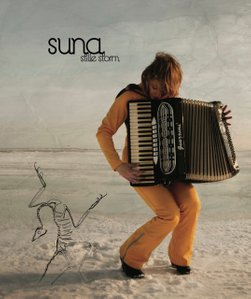 This was my first Danish band, started in 2003 in Copenhagen. We went from a vocal a cappella repertoire to balkan music, ending up experimenting with our own material into a new Nordic sound. We took inspiration from “world” and folk music, jazz, electronica and the empty space between sounds.

The last album was “stille storm” from 2010, produced by Finn Jansen.

In 2014 the front figures and main composers of the band Malene I. Madsen and Søren Koh Pendrup died after 3 years of illness, within 3 weeks one after the other. They were married and left their daughter Kaya-Vida.

Me and the bassist/guitarist Simon H. Hansen keep on playing together today, mainly his own songs.

Between 2005 and 2013 I have been playing more then 300 concerts with the Nordic folktronica band Valravn, we toured in 20 countries from Europe to Japan and Russia. We released 2 studio albums, nominated to several Danish Music Awards, as well as a one with remixes. In 2008 we played at Roskilde Festival and created with Mute Comp. the dance performance “Grasping the floor with the back of my head”, nominated to a Danish Reumert and winner of the first prize at the Cairo Experimental Theatre Festival.

The beginning of this adventure started in the medieval band Virelai back in 2003. My dear companions here have been Anna Katrin Egilstrød, Christopher Juul, Søren Hammerlund and Martin Seeberg.