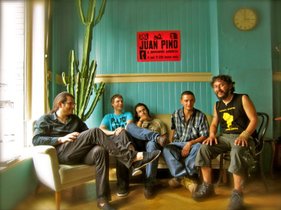 Quemando Palabras are warm and groovy words for the soul, at times soft Andean chants, other times fiery rap as fire on asphalt.

Based between Ecuador, Denmark and Switzerland, the constantly changing line up is a multicultural collective of folk and jazz musicians with the singer-songwriter Juan Pino and the MC Iván Pino in front.

In 2004 Juan started to set music to the lyrics of his father Bruno, pioneer in the South American street poetry movement of the ‘70s.

The debut album “Mama America” was a travel from the Andes’ roots to the urban Latin culture, from which the title track was nominated best new folk song by the National Radio of Ecuador in 2011.

The new album “de la muerte y de otras cosas” explores electronics sounds and beats as well as new traditional instruments such as marimba and harmonicas. This time Juan and his cousin Ivan have been writing most of the lyrics.

Juan was born in Ecuador and grew up in the south of Alps. Since 2002 he lives in Copenhagen where he has been percussionist for among others the bands Valravn and SUNA. 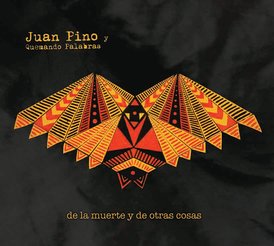